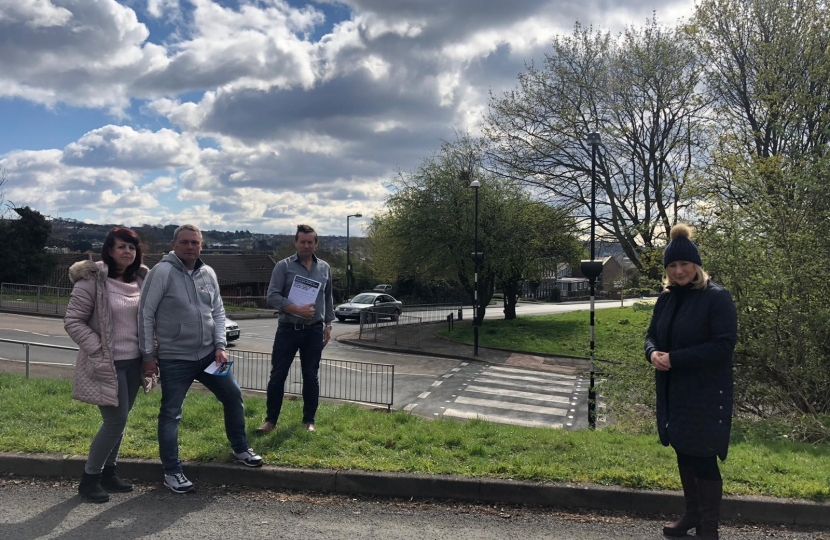 Stourbridge MP Suzanne Webb has vowed to help a local family’s campaign to improve road safety on Saltwells Road after their daughter was knocked over by a car on the zebra crossing and seriously injured.

Rebecca Cooksey is now back at home following the incident at 8pm on April 2 near Aldi when she collided with the car on the crossing while walking her dog. Police are investigating the incident.

Suzanne met with Rebecca’s parents Tony and Sharon Cooksey today at the scene along with local campaigner Rob Clinton to discuss their campaign to improve the crossing. Suzanne is now going to set up a petition asking for Dudley Council to look at improving the crossing’s safety features.

Tony witnessed his daughter - a 26-year-old medical administrator - receive her injuries and the footage of the collision was captured on CCTV.

The family, who live in Evesham Rise, would like the zebra crossing turned into a traffic signalling system with speed cameras, if appropriate.

“This was a very distressing incident and I am thankful Rebecca is going to make a full recovery but it could have been very different,” said Suzanne.

“From speaking to Tony and Sharon and Rob Clinton, who has already highlighted the danger of the crossing and speeding cars, it’s clear we need the authorities to look at making this area safer for pedestrians before there is a real tragedy.

“While we were talking today a car sped right through the crossing while someone was on it.

“I certainly support the family’s campaign and I think the petition would be a good start. I will also be writing to the police and the council asking for their views on what is happening in Saltwells Lane.

“I would ask anyone who has experienced issues on the crossing to get in touch with either myself or Rob Clinton.”

Tony added: “Saltwells Road is an absolute nightmare with cars racing up and down. Traffic never stops at the crossing and often overtake other cars actually on the crossing to get down Bowling Green Road.

"We see incidents and near misses happen on this road on a daily basis where vehicles fail to stop at the pedestrian crossing.

"Although she suffered many injuries our daughter was lucky enough to have not been killed. We are concerned that a fatality is a real possibility unless measures are put in place to improve this outdated crossing.”

Stourbridge MP Suzanne Webb said today the Domestic Violence Bill, which is about to become law, will strengthen protection for victims and close legal loopholes for abusers.