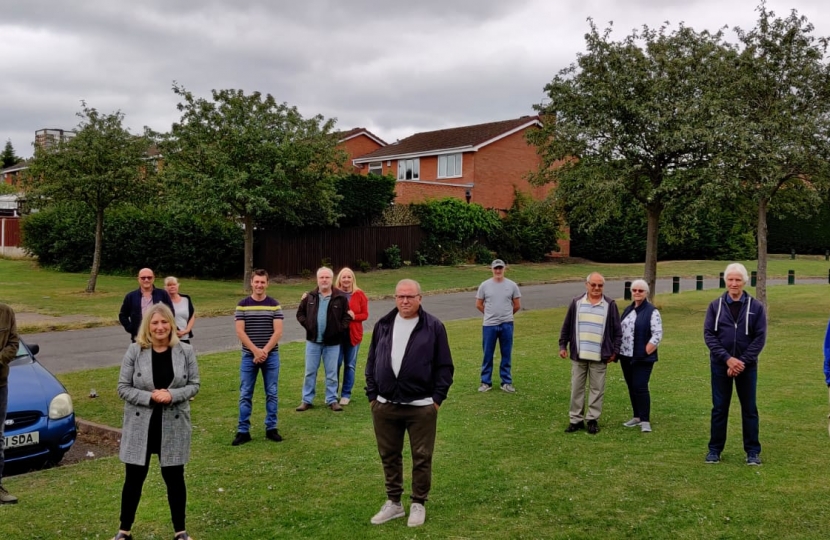 Local residents in Withymoor have secured the backing of Stourbridge MP Suzanne Webb in their campaign against anti-social behaviour on a local car park.

The car park located at the end of Turner’s Lane has attracted groups of cars late into the night and the early morning wheel spinning, racing, playing loud music and drug taking. Local residents met on Saturday to discuss these issues with local campaigners Suzanne Webb MP, Kamran Razzaq, Cllr Paul Bradley and Cllr Pete Lee. They heard that the behaviour was making residents whose properties back onto the car park’s lives a misery.

Local residents have been suffering this behaviour for a long time, however the issue has worsened during “lockdown”. Police have in the past moved drivers on, however, local residents are now calling for a barrier to be installed on the car park to keep it closed at night.

Supporting the plan, Suzanne Webb MP said “Local residents should not have to put up with this kind of anti-social and dangerous behaviour, let alone up until the small hours of the morning.

“They have put forward a reasonable plan to discourage this activity which has been explained to me by Cllr Paul Bradley and local residents. A barrier, managed by local residents to ensure the car park can continue to be used legitimately, would be a big step in giving residents a break from this awful behaviour.”

Cllr Paul Bradley said “The residents of Withymoor have had to put up with this for too long, so we are now working on a plan to secure funding for a barrier to be installed on the car park. We are exploring options of where the £3000 required for the project will come from, but I am hopeful that working together we will be able to get this money and make a difference.

“I welcome Suzanne’s support of the plan, and thank her for taking the time to listen to residents’ concerns on Saturday.”

Last week the House of Commons rose for summer recess and so I thought I would take the opportunity to reflect on my last eight months as your MP.

Firstly, I am proud to say that in this time, I voted to get Brexit done and we have left the European Union.