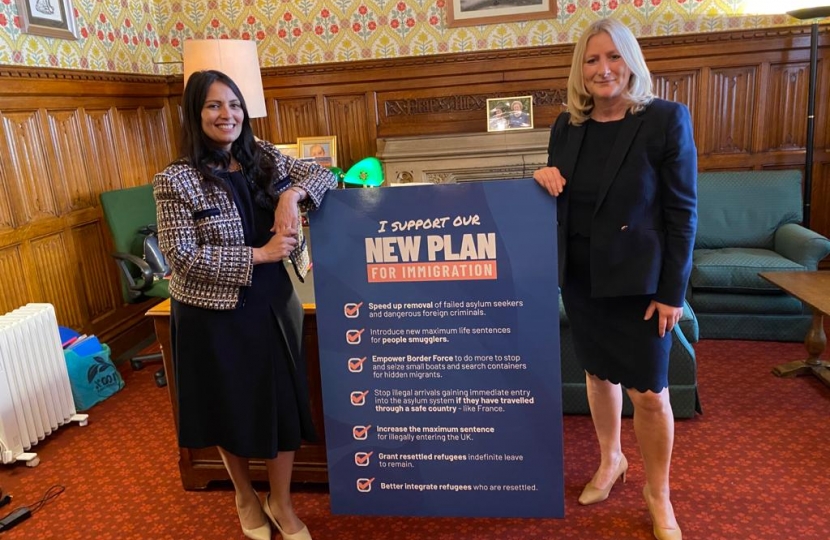 Stourbridge MP Suzanne Webb has met with the Home Secretary in Westminster to discuss the Nationality and Borders Bill.

It will look to make the UK’s asylum system based on need, not on the ability to pay people smugglers who enable people to travel across the English Channel in boats or in containers.

Jail terms for those who people smuggle will be increased to life imprisonment.

Those with no right to be in the UK should be removed without the substantial delays which are now commonplace. Those in genuine need will be protected.

The Government also intends to implement an Electronic Travel Authorisation (ETA) scheme, similar to the USA ESTA programme to block the entry of those who present a threat to the UK.

“It was a major part of the Government’s manifesto to reform our immigration system and this comprehensive bill, which is a root and branch reform of the system, has my support,” said Suzanne.

“The Home Secretary talked about the bill and she said the case for change is overwhelming, the system is broken and it needs to be fairer, and I think many people in Stourbridge agree.

“It must also be stressed that this legislation stands right at the front of our moral and legal obligations to help those fleeing danger from around the world – something we have a long history of doing and something that will not change with these reforms.”

Figures show that the numbers of people seeking UK asylum continues to rise. In 2019, applications increased by 21% on the previous year to almost 36,000 – the highest figure since 2015/16. The cost of running the asylum system is £1 billion a year.

The number trying to get to the UK on boats across the English Channel has also risen with over 3,700 people arriving in the UK this way in the first five months of 2021. This is more than double the comparable figure for 2020.

Over the last six years, the UK directly resettled 25,000 people from places of danger - more than any other country in Europe.

Stourbridge MP Suzanne Webb has given her views to the Black Country Plan proposals and said that residents are opposed to building on greenfield sites at Pedmore and Wollaston Farm.